BURGAW, N.C. — Blueberry picking is well underway on many farms across our state and although not all of them stem from long lines of blueberry farmers, their roots run deep all the same.

What You Need To Know

“I remember going out with my dad and picking a bowl of blueberries and making blueberry pancakes,” Heimbach said. “I kind of joke, my dad decided to become a blueberry farmer because he loved me so much.” 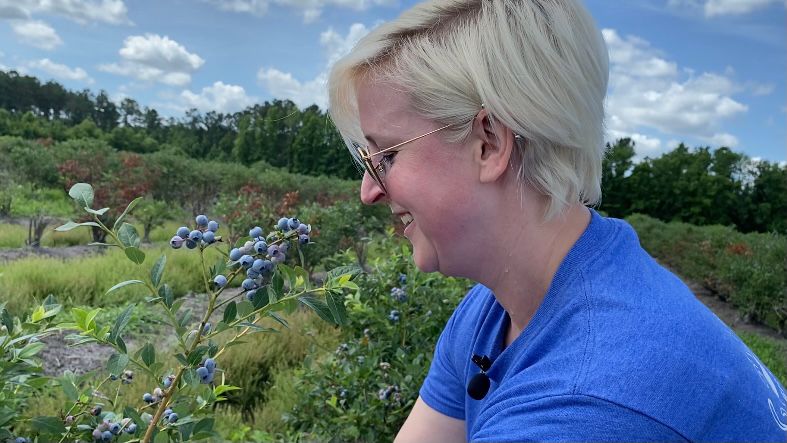 It hasn’t been generation after generation at Shaken Creek, but it’s a family operation nonetheless and they like to do things the old-fashioned way as much as possible – utilizing hand pickers rather than machine harvesters.

“Before I had started working on the farm, I came down with my sister and we grabbed buckets and were picking. And there were these ladies picking beside us and they were watching us and kind of just laughing at us because they had filled their buckets up a few times and we had half a bucket each,” Heimbach said.

Now she’s lucky if she gets through harvest without sampling a few, but she just considers it “quality control.”

“People often like to ask what’s my favorite variety and I almost always will say whichever one is in my hand that I’m eating,” Heimbach said.

But there are some things they’re specifically looking for when they’re picking, and contrary to popular belief, the dark blueberries aren’t really the ones they want to pick. 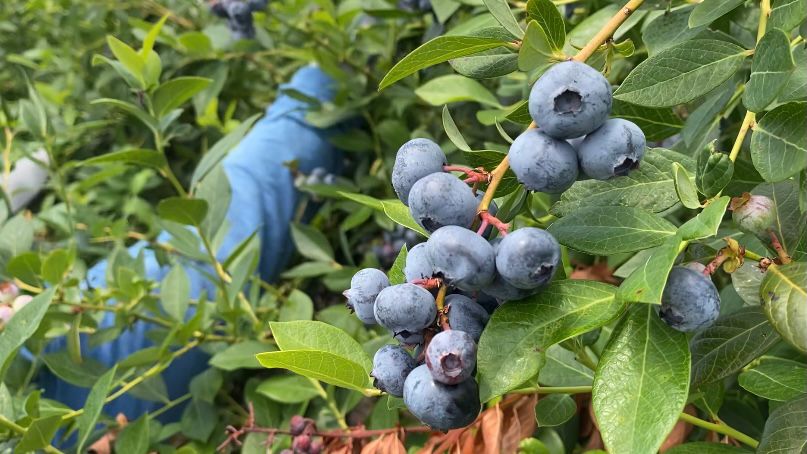 A ripe bunch of blueberries waiting to be picked. (Photo: Rachel Boyd)

“There’s this white powder, and if you rub it a little bit, that’ll come off and the berry gets darker,” Heimbach said. “We want kind of a dusty blue blueberry and that’s what keeps it from getting too ripe before it gets to your home.”

Especially during harvest, there’s no end of work on a farm and at Shaken Creek they have nearly 100 acres of bushes to pick before the end of the season. There would be more if Hurricane Florence hadn’t left their fields flooded in 2018, submerging some bushes and leaving others with only the very top branches peeking out.

Last year’s harvest was their first since the damage and even though they’re “back in blue” as their shirts say, recovery is an ongoing process.

“We’re still seeing bushes that are kind of dying from that water, from that flood,” Heimbach said. “Believe it or not, like out here you couldn’t even tell that there were blueberry bushes.”

Blueberry harvest really does take a village, but the growers of North Carolina are more like family than competition as struggles and losses are frequently felt across the board.

“I feel like all the growers in North Carolina kind of stick together,” Heimbach said. “If I could tell our consumers one thing, know that we take so much care and pride into producing a safe and delicious berry.”