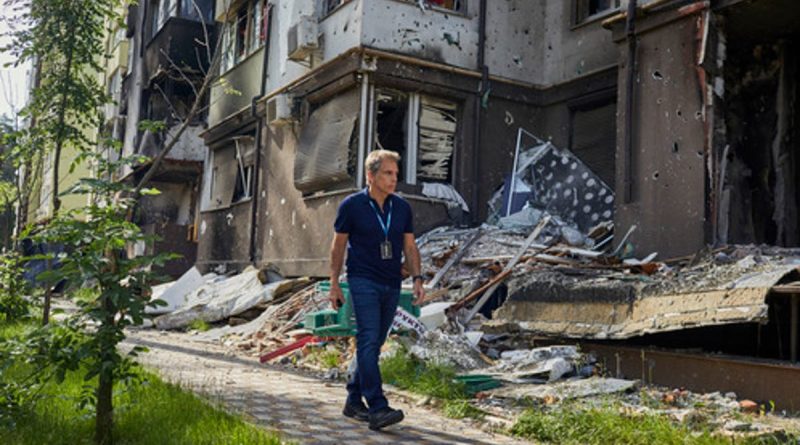 Russia threatened retaliation against Lithuania on Monday after its leaders refused to allow rail shipments of sanctioned goods to roll through the country into Russia’s  Kaliningrad exclave of 400,000 people.

The Foreign Ministry in Moscow described the decision as unprecedented and “openly hostile” and added: “Russia reserves the right to take action in defense of its national interests” if full transportation rights are not restored.

Lithuanian Foreign Minister Gabrielius Landsbergis said the sanctions were imposed by the European Union and his decision came after discussions with the European Commission. Sanctioned goods already include steel, with alcohol and coal soon to be added.

Kaliningrad is surrounded by Lithuania, with a population of less than 3 million, and Poland to the south. Russia can still supply the exclave by sea.

►Representatives of Sweden, Finland, and Turkey will continue negotiating after Monday’s meeting in Brussels failed to yield a breakthrough regarding Turkey’s opposition to the two Nordic countries joining NATO, a move that requires unanimity from all 30 member nations. Turkey has expressed concern over perceived support for Kurdish militants by Sweden and Finland.

►The Polish soccer federation said it won’t consider defender Maciej Rybus in its plans for the World Cup in Qatar after he signed a new contract with his Moscow-based club following the Russian invasion of Ukraine.

USA TODAY ON TELEGRAM: Join our Russia-Ukraine war channel to receive updates straight to your phone.

China’s crude oil imports from Russia rose 55% in May from a year earlier and topped Saudi Arabia as the top supplier, Chinese customs officials reported.

Moscow was compelled to slash prices as European sanctions dried up demand for its crude in Germany and other countries. China, which has rejected sanctions and pledged some support for Russia, imported more than 8 million metric tons, up from about 5.5 million a year earlier. India is among other nations that have also drastically increased purchases of Russian crude.

The U.S. and Britain have cut off purchases of all Russian oil, citing the invasion, while other Western countries are developing plans to do so. Europe remains a major purchaser of Russian natural gas, a dependency that could prove difficult to relinquish when heating demands rise this winter.

Actor and director Ben Stiller, the U.N. refugee agency’s goodwill ambassador, marked World Refugee Day on Monday by visiting Ukraine and Poland and meeting with families displaced by the war.

“War and violence are devastating people all over the world,” Stiller said in a video posted on Instagram from Ukraine. “Nobody chooses to flee their home. Seeking safety is a right and it needs to be upheld for every person.”

More than 5 million refugees have fled Ukraine since the war began, and millions more have fled their homes to safer cities within the country, the U.N. says. About 90% are women and children. The result has become one of the largest forced displacement crises since World War II, the U.N. says.

“Families have been torn apart and the trauma of war will have a lasting impact on many of those forced to flee their homes,” the agency said in a statement.

Deputy Defense Minister Hanna Maliar, speaking on Ukraine TV, said the Kremlin has “thrown virtually all its forces and resources” at storming the surrounding settlements and breaking through outmanned, outgunned Ukraine defenses. The city is one of the last remaining outposts for Ukrainian troops in Luhansk Oblast, which along with Donetsk Oblast makes up the industrial Donbas region Russia has sought to control.

“Now, without exaggeration, decisive battles are continuing in the area of Sievierodonetsk, and the enemy plans (to control) Luhansk Oblast by June 26,” Maliar said.

Said Luhansk governor Serhiy Haidai: “It’s just hell there. Everything is engulfed in fire, the shelling doesn’t stop even for an hour.”

Ukrainian medic who aided wounded on both sides freed by Russians

A celebrated Ukrainian medic who treated soldiers on both sides of the war was freed by Russian forces three months after she was taken captive on the streets of Mariupol, a development Ukrainian President Volodymyr Zelenskyy announced this weekend.

Yuliia Paievska is known in Ukraine as Taira, a nickname she chose in the World of Warcraft video game. Using a body camera, she recorded 256 gigabytes of her group’s efforts over two weeks to save the wounded — both Ukrainians and Russians — and had the footage smuggled out of the besieged city by an Associated Press team.

The videos, shown by major networks in the U.S. and Europe, were seen by millions of people globally. They illustrated the war’s brutality but also the medical workers’ humanity. Taira and a colleague were taken prisoner by Russian forces on March 16.

“I’m grateful to everyone who worked for this result. Taira is already home,” Zelenskyy said in a national address over the weekend. “We will keep working to free everyone.”

Stressed out schools: How parents and teachers choices are changing education – USA TODAY

On today’s episode of the 5 Things podcast: How are schools across the nation faring now that school is back

DAN BONGINO: Is the United States on the communist fast track? – Fox News